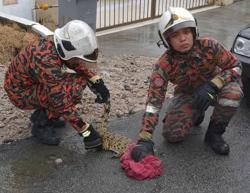 Feisty catch: APM personnel tying up the legs of the crocodile before handing it over to Perhilitan. — Bernama

KUALA NERUS: An estuarine crocodile or buaya tembaga (crocodylus porosus) weighing 70kg was caught by a group of anglers at an abandoned mine in Kampung Ladang Sentosa here.

Terengganu Malaysia Civil Defence Force (APM) director Lt-Kol Che Adam A Rahman said the 2.3m-long reptile, which was caught on Saturday, had been handed over to the state National Parks and Wildlife Department (Perhilitan).

‘’The crocodile had tried to grab the leg of one of the five anglers who were fishing in the area. The anglers, who were residents of a village nearby, set up a trap and caught the reptile.

“After they contacted us, we went to the scene and took the crocodile to the APM office to be handed over to Perhilitan, ’’ he said yesterday.

The catching of this crocodile was the first since another was caught in Kampung Seberang Takir in 2017.

Lt-Kol Che Adam said the change in the monsoon and the uncertain weather was forcing reptiles such as crocodiles and snakes to seek new habitats as their original habitats were underwater.

“We urge the public and recreation enthusiasts such as anglers visiting recreational areas to be careful of the presence of reptiles during this period, ’’ he said.