Bomba personnel inspecting the area around the apartment on Persiaran Syed Putra. – Bernama

KUALA LUMPUR (Bernama): Eleven occupants of a three-storey apartment in Persiaran Syed Putra here had a terrifying experience when the embankment near their residence collapsed following heavy rain on Thursday (Oct 1) night.

A spokesman from the Kuala Lumpur fire operations centre said 17 firemen from the Hang Tuah and Seputeh stations were dispatched after receiving a distress call at about 10pm.

At the scene, the team noticed there was soil erosion at the embankment affecting six apartment units on the lower ground floor, he said.

The occupants of the affected apartment units were advised to vacate their homes after an inspection by the Kuala Lumpur City hall found that it was no longer safe.

He said there was also a workers' quarters on the embankment and its occupants, five foreign nationals, were also ordered to vacate. – Bernama 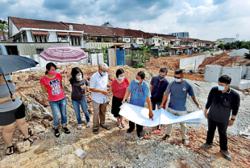