Muhyiddin said the move was following the request by the Malay Consultative Council of Malaysia (MPM).

“I would like to announce that the welfare of the bumiputras will now come directly under my purview, ” he said when closing the month-long Bumiputra Economic Congress here yesterday.

He said an implementation committee would be formed and headed by Minister in the Prime Minister’s Department Datuk Seri Mustapa Mohamed who will work with MPM to implement the resolutions presented to the government.

Muhyiddin also said despite many strategies and programmes to uplift the bumiputra community, they continue to lag behind other races.

Based on a study last year, he said poverty among the bumiputra was the highest at 7.2% compared to 1.4% among the Chinese and 4.8% among the Indians.

“Apart from this, income disparity between the bumiputras and Chinese last year was at RM2,802, which is four times higher than in 1989.

“These two indicators give a picture that the bumiputras are still lagging behind the other races despite efforts made through the various Malaysia development plans and the New Economic Policy (NEP), ” he said.

To overcome this, Muhyiddin said the bumiputra community must keep abreast with global economic developments, including developing a positive ecosystem which was more competitive.

“We cannot remain with the old ways and need to face the new norms especially in such trying economic times due to the Covid-19 pandemic, ” he added.

In order to achieve a “bumiputra renaissance”, Muhyiddin said successful bumiputra companies should adopt the “paying it forward” concept to help the next generation of bumiputras succeed.

“It is time that those who had benefited under the NEP to return the favour by giving back to the next generation.

“For example, those in businesses have the opportunity to lay the foundations for those who need help by providing them mentor capital and network capital, ” he said.

Among the nine resolutions presented by the congress was for Majlis Amanah Rakyat (Mara) and the Islamic Economic Development Foundation (Yapeim) to come under the Prime Minister’s Department. 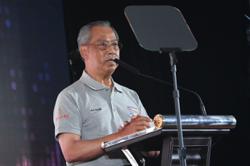