Cause for concern: Students leaving after classes at a school in Port Klang. A majority of PTAs in Klang want the authorities to shut down schools until further notice.

KLANG: Worried that their children would be exposed to Covid-19, a majority of Parent-Teacher Associations (PTAs) in Klang want the authorities to shut down schools until further notice.

So far, 64 PTAs out of the almost 100 in the district have collectively drafted as well as signed a petition and forwarded it to the Selangor Education Department through the district education office.

One of the PTAs’ deputy chairman, Rajan Marie, said the matter was discussed in a social media group which consisted of all Klang schools’ PTA chairmen and their deputies.

Rajan, whose 16-year-old son attends Form Four in a secondary school here, said schools might as well be closed given that attendance was very low.

The PTA chairman of a primary school in Port Klang, Zainul Alam Abdul Kadir, said: “Let it not be like what happened in Kedah where school students were infected and their classmates had to undergo the Covid-19 test. We do not want our children to go through such a traumatic experience.’’

Klang was hit with new cases recently when a Sabahan family came back here infected with Covid-19 after attending a celebration in their home state.

One of the sisters had also attended a birthday party at the home of an individual who worked in Klang MP Charles Santiago’s service centre.

Selangor education director Izmi Ismail said the schools would remain open for now as the situation was under control.

“Only two students were Covid-19 positive and the numbers have not increased since.

“We have done the necessary such as placing those exposed to the two students under quarantine as well as sanitising their school, ” said Izmi when contacted.

He added that the jurisdiction on whether to close the schools or otherwise was the Health Ministry’s and the National Security Council’s.

Mentri Besar Datuk Seri Amirudin Shari had stated in his Facebook Timeline that following the drastic increase in cases, he had called for a meeting of the Selangor Task Force For Covid-19 and the state security council committee to discuss the next course of action.

He added that the state government would announce several proactive measures to tackle the matter as soon as possible.

Meanwhile, Klang MP Santiago said the authorities must initiate stringent measures to curb the spread of infection when the numbers were still small.

He said teachers were also feeling very uncomfortable under the current circumstances and this created a very bad teaching environment. 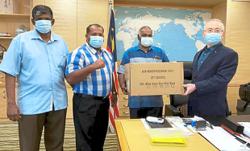 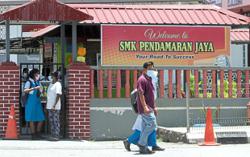