SIBU: A woman lost RM11,100 after receiving a call from scammers who posed as officers from the Inland Revenue Board (LHDN) and the police.

The complainant who works as a clerk at a utility company received a call on Sept 29 from a woman who introduced herself as an officer with LHDN in Kuantan.

Sibu OCPD Asst Comm Stanley Jonathan Ringgit said the suspect told the complainant that she had tax arrears amounting to RM40,500.93 with a company.

"When the complainant denied having any unpaid taxes, the line was connected to a man who introduced himself as 'Sgt Fairuz Abdullah' from the Kuantan police station," he said.

This time, she was told that her name was implicated in a money-laundering case and an arrest warrant had been issued against her.

This caused the woman to panic.

"The suspect then said he could help her settle the case, but she would have to pay RM20,000 for the withdrawal of the arrest warrant," said ACP Stanley.

On that same day, the complainant made two online transactions totalling RM11,100, depositing the amount into an account number provided by the suspect.

"The complainant only realised that she had been deceived after an officer from the LHDN informed her that she did not have any tax arrears.

"The case is being investigated under Section 420 of the Penal Code for cheating," he added. 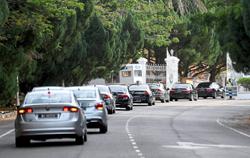