JOHOR BARU: A 39-year-old woman was slapped with a fine of RM2,800 for drink-driving along Jalan Masai Lama near Seri Alam here.

Seri Alam OCPD Supt Ismail Dollah said the woman was arrested during an Ops Mabuk operation at around 11pm on Wednesday (Sept 30).

He said she was arrested under Section 45A(1) of the Road Transport Act 1987 for driving under the influence of alcohol.

“She was brought to the Johor Baru traffic court on Thursday (Oct 1), where she was ordered to pay a fine of RM2,800 or (get) two months in jail in default, ” he said in a statement.

Supt Ismail added that under the Ops Mabuk conducted on Wednesday, 19 summonses were issued to road users for going against traffic rules.

He also advised road users not to drink and drive, for their own safety and the safety of others. 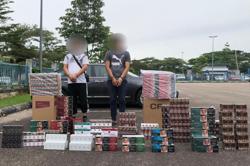 JB cops arrest duo with cigarettes worth over RM100,000