PETALING JAYA: A motorist was injured after falling inside an eight-foot deep drain near a petrol station in Pandan Indah.

"The victim suffered a broken leg and arm from the fall.

"He was rescued and has been handed over to the Ampang hospital ambulance," a Fire and Rescue department spokesperson said in a statement on Thursday (Oct 1).

A video taken at the scene shows the injured motorist sprawled on the ground with bystanders looking over.

His motorcycle can be seen a few feet away from him. 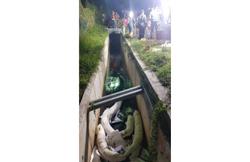