Ain’t no mountain too high for this cat

Meowntain hike: Jibek pictured at a few mountains it climbed with its owner.

PETALING JAYA: This cat is only four years old but it’s already proven that there’s no mountain too high for it to conquer.

Jibek has set his paws on more than 30 mountains in Malaysia with his owner, Azhan Dziaruddin, 39, who started taking Jibek with him on his treks when the mixed breed cat was just six months old.

The cute feline has even conquered the peninsula’s G7, which are the seven highest mountains in Peninsular Malaysia. These are Mount Chamah, Mount Ulu Sepat, Mount Yong Yap, Mount Korbu, Mount Gayong, Mount Yong Belar and Mount Tahan, which is the highest in the range, at 2,190m.

“Jibek’s first hiking experience was up Mount Nuang in Hulu Langat. At first, I was worried that Jibek would act up but surprisingly he really liked it and even refused to be in his carrier.

“Jibek sat on my shoulder and would come down when he wanted to walk but on a leash, ” Azhan told mStar during an interview after Jibek’s first Flying Fox experience at Skytrex Sungai Congkak at Lipur Sungai Congkak Jungle, Hulu Langat, recently.

Ever since then, Jibek has been his hiking companion.

Azhan said he never had a pet before and decided to adopt Jibek when he found him near his house.

The name Jibek came from the cat’s habit of licking Azhan’s bag.

“Jibek is short for jilat beg (licking bag), ” he said.

Azhan added that every time they went for a hike, he would prepare all of Jibek’s necessities such as food, raincoat as well as daily clothes.

Azhan claims that among Jibek’s special traits is his ability to sense danger whenever Azhan and his friends were in an unsafe area, or if there were wild animals nearby as well as supernatural beings.

Last month, he took Jibek paragliding and discovered that his cat was not scared of flying.

When asked about his next expedition with Jibek, Azhan said he had planned to hike a few popular mountains in Indonesia.

“We were supposed to fly this year, I even have Jibek’s passport ready but unfortunately the pandemic has prevented this but God-willing, that dream will come true, ” he said. 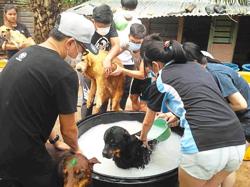