BUTTERWORTH: Four restaurants were shut down and nine individuals were arrested during a raid on 13 shops at a mall in Bukit Mertajam on Saturday (Sept 26).

“We closed down all four restaurants under Section 11 of the Food Act, as live cockroaches were found in the kitchen of the premises.

“The sundry shops were issued notices, and we seized various food products along with alcoholic beverages, ” he said during a press conference.

Mohd Wazir said the items seized had no proper labelling, no importer or distributor addresses, with most labelled entirely in Burmese.

“Selling food products without proper labelling or information is an offence, so we seized the food products.

“We are suspicious about the origins of these products, and how these items were brought in to the country since imported items need to have labels either in English or Bahasa Malaysia.

He added that while the premises had licenses under the name of locals, almost 100% of them were managed by foreigners.

“We warn those involved to take this seriously because if the premises are managed by foreigners, things get difficult when we carry out operations in terms of communication.

He added that during the raid, police also arrested nine individuals, seven men and two women, one of whom was a local. 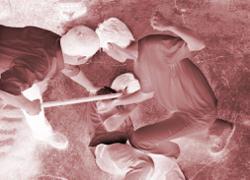