JOHOR BARU: MIC would like to contest more parliamentary seats in Johor in the next general election, says Tan Sri S.A. Vigneswaran (pic).

The MIC president said that the party was looking at increasing its representation at both Federal and state level through the next general election.

"We will be contesting in at least one parliamentary seat in Johor.

"We may contest in more seats (in the next general election) as we are looking at increasing the number of MPs as well as state assemblymen," he said after the state MIC convention in Kulai here on Friday (Sept 25).

He added that MIC hoped to win at least five parliamentary seats in GE15.

"Previously, the perception was that MIC was not doing enough for the Indians in this country.

"After Pakatan Harapan took over in the previous general election, they (voters) understand that the Barisan Nasional government had been doing more compared to Pakatan," he said.

Asked if he thought it was the right time for a general election, Vigneswaran said that it was not. 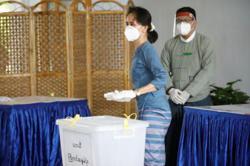