Nostalgic treasures: Zainol working meticulously on a replica of a ferry at his home in Sama Gagah. — Bernama

BUKIT MERTAJAM: His passion for woodcarving has not dimmed, despite him getting on in age.

Zainol Abidin Omar, 75, produces intricate carvings of various Penang icons such as the ferry, Penang Bridge and the funicular train to Penang Hill.

He uses mostly plywood and a type of light hardwood known as ‘jelutong’, scientifically known as Dyera costulata.

The woodcarver, who picked up the art from Indonesian friends, said he would normally take two to five days to complete a wooden replica of a ferry.

“I began making carving of ferries, the Penang Bridge and the funicular train in 1986.

“I learned the art from my Indonesian friends who were then working here (in Penang). Before that, I was a painter, ” he said when met at his house in Sama Gagah near here recently.

Zainol, who has three children, said his ferry carvings were sold for only RM15 each in 1986, but each one can now fetch up to RM250.

It costs RM480 for a carving of the Penang Bridge and RM300 for the train, he said.

“I also make carvings of traditional houses which are sold for RM350 a piece, ” he said.

Zainol said he cherished every piece of his work because of the painstaking effort he took to complete them.

“It is that satisfied feeling I get when I complete each piece. That is what that keeps me wanting to continue to carve, ” he said, adding that the process started with cutting the wood, shaping and carving and then painting each model.

Zainol said he has produced more than 4,000 pieces of wood carvings to date.

His wife Rogayah Mahmood, 66, would also give him a helping hand at times.

Zainol has received orders for his wood carvings from private companies, factories and private individuals.

His recent orders included 15 pieces of a ferry replica by the Penang Port Commission.

Zainol’s hope is to see more young people take up the art of woodcarving. — Bernama

Around 150 stranded after Penang Hill train broke down 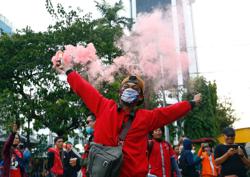