Rising to the occasion: Mohd Azizul says he saw many helpless people in need of such services.

BESUT: The less fortunate people in the Besut district who could not afford to pay for the funeral services of their family members can now call a team of seven volunteers to do it for free.

Besides claiming the body from the hospital, the team will also ensure that family members will not experience any burden during the whole funeral process.

The team known as ‘Tim Amal Jenazah Besut’ led by Mohd Azizul Azli Mohd Sani was formed in the middle of last year as an initiative to serve the community and as a way to gain motivation.

The 36-year-old contractor said the team now had four hearses, of which two were placed at Surau Kampung Gaung in Jertih and one each at Ulul Albab Mosque and Kampung Tok Has Mosque.

“Besides managing funerals in this district, we have also sent bodies to other states such as Penang and Johor without any charge.

“We are helping people sincerely because we don’t want the next of kin to face hardship as they grieve over their lost loved ones, ” he said.

Mohd Azizul said the hearse drivers also did not receive any fixed income or allowance but they offered their services voluntarily.

However, if there is any contribution, the money will be credited into the funeral management fund of others.

Mohd Azizul said the idea to provide free van and funeral services was mooted after seeing many helpless poor people in need, and he also often received calls from locals asking for help.

Currently, the team is actively building a special section in Surau Kampung Gaung to bathe the bodies including those without any family members.

Poor residents in the district can call Mohd Azizul at 013-972 1200 for his assistance for free funeral services. — Bernama 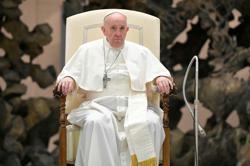 Pope vows to fight corruption but sees it as uphill struggle