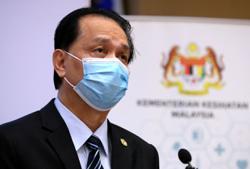 This brings the total number of infections to 10,505 cases.

Sabah again recorded the highest number of cases, at 110 infections among Malaysians and 24 cases among non-citizens.

Kedah had five local cases and Selangor had two while Kelantan and Kuala Lumpur had a case each.

Meanwhile, a total of four cases were imported, with three cases from India and one from Indonesia.

The three deaths recorded on Wednesday (Sept 23) brought the death toll to 133, or 1.27% out of the total number of cases.

The 131st death was a 48-year-old Indonesian woman with a history of diabetes and hypertension who was admitted to Tawau Hospital on Sept 18 in a semi-conscious state, said Dr Noor Hisham.

The 132nd death was of a 54-year-old Malaysian man who was treated at Hospital Semporna on Sept 18 after displaying symptoms.

He succumbed to the disease on Tuesday (Sept 22) and his Covid-19 turned up positive on the same day.

The 133rd death was another Malaysian man, aged 72, with a history of stroke.

“He was a close contact to another patient who had passed away in the Tawar cluster.

“He was asymptomatic and tested positive for Covid-19 on August 19 and admitted to Hospital Sultanah Bahiyah in Alor Setar.

Dr Noor Hisham also said 39 patients had recovered with a total of 9,602 recoveries or 91.40% out of the overall number of cases since the Covid-19 outbreak began.

There are currently 770 active cases being treated at the country’s health facilities, with eight patients in the intensive care units (ICU) and two of them requiring ventilator support.