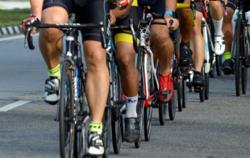 Alliance for Safe Community chairman Tan Sri Lee Lam Thye said he agreed that cyclists should not be allowed on highways or expressways, but felt that the local authorities should provide designated cycling lanes.

“There should be a balance between the safety of road users and the interest of cycling enthusiasts, ” he said.

He was commenting on The Star’s front page report which highlighted the barring of cyclists on highways.

Lee urged local authorities to work with the Youth and Sports Ministry to identify suitable locations for designated bike lanes.

““Cycling has become a popular form of exercise among Malaysians. Nowadays, I see many people, even the elderly, taking up cycling as a hobby.

“If an accident occurs, cyclists are vulnerable. Motorcycle accidents are bad enough, we do not want to add cyclists to the statistics. Thus, the time has come to provide designated cycling lanes, ” he said.

“The only occasion when cyclists should be allowed on the roads is when it is an event managed by the authorities such as the multiple stage bicycle race Le Tour de Langkawi, ” he said.