KUALA LUMPUR: A contractor failed in its bid to obtain an interim injunction to restrain and prevent the government from cancelling or terminating its contract for Phase 2 of the Klang Valley Double Track Rehabilitation Project (KVDT2).

In dismissing the application, Justice Aliza said the court was bound by the Federal Court’s previous decision that no injunction could be made against the government and public officials (from performing its public duties).

“I am inclined to follow the decision (of Federal Court). Therefore, this application is dismissed with costs of RM10,000, ” she said.

Lawyer Tan Sri Cecil Abraham, who represented Dhaya Maju LTAT, then informed the court that the company would appeal the decision at the Court of Appeal.

The project came under scrutiny after Finance Minister Tengku Datuk Seri Zafrul Aziz released a list of 101 projects awarded via direct negotiations worth RM6.61bil during the Pakatan Harapan administration.

In a statement on Aug 28, Dr Wee said the ministry would reopen the tender for KVDT2 after taking into consideration the extensive study which found the cost of the project to be overpriced.

Earlier, Abraham submitted that Dr Wee’s statement gave the impression that the contract would be terminated.

“We are not restraining the government and minister from performing their public duties.

“This case today is purely contractual in nature as we intend to maintain the status quo, ” he said.

Senior federal counsel (SFC) Habibah Haron countered that a multi-billion ringgit project could not be decided through a press statement.SFC Asliza Ali said any cancellation of a project must be followed by a formal notice of termination.

“In our case, there was no formal notice of termination. For them (the plaintiff) to proceed with this civil action is premature, ” she said, adding that the government must perform its public duty regarding KVDT2.The court then fixed Oct 19 for case management.

In the suit filed on Sept 7, Dhaya Maju LTAT sought a declaration that there existed a valid and binding contract between the company and the government by way of a Letter of Acceptance dated Aug 19,2019, among others. — Bernama 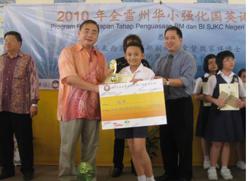 Drop in flood evacuee numbers
PM meets virtually with MBs and CMs over Emergency
Private hospitals ready for patients
Kopitiam depending on regular clients nowadays
New cases break 4,000 mark
Legal giant gone but not forgotten
Father and son bond over video games
‘Hotpot’ Datuk and second suspect out on bail
No political motive for state of Emergency, but a matter of life and death, says Takiyuddin
PMO: RM35.43mil allocation to build three public halls in Pagoh, not one