PETALING JAYA: Seven men and a woman were detained following raids on illegal online gambling centres in the district.

"We detained five men and a woman aged between 20 and 35.

"They were working as operators and supervising online gambling activities at the premises," he said when contacted.

A total of 11 computers and 40 mobile phones used to promote slot games and a live casino were also seized, he added.

"They have been operating for about a year and raking in about RM18,000 a day.

Further investigation led police to another unit at the same office block at 2.45pm on the same day, ACP Nik Ezanee said.

"We detained a 21-year-old man who worked as an operator for online gambling activities.

"Five computers and six mobile phones were also seized from the premises," he said.

The second premises had been operating for about a year, earning RM5,000 daily, ACP Nik Ezanee said.

"We also detained a 40-year-old man representing the syndicates, who arrived during the raid.

"The man tried to negotiate with the raiding team in an attempt to release those detained. He was detained even before he could make an offer," he added.

"We are working hard to identify the mastermind behind the syndicate, as well as the owner of the premises.

"We are also grateful to the people of Petaling Jaya who supplied the police with vital information that led to the arrests," he added. 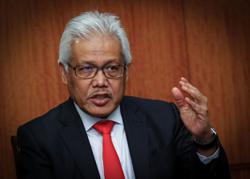