PORT KLANG: The Pandamaran police station will undergo sanitisation after policemen there came into contact with four undocumented migrants that were suspected to be positive in the preliminary Covid-19 test.

The four - three men and a woman - were among 77 Indonesians detained on Monday (Sept 14) for trying to sneak into the country through the Pulau Ketam sea route.

They were being held at the Pandamaran police station when the Covid-19 test results revealed the infection.

"The policemen who handled them have been quarantined and the Pandamaran police station will be sanitised at least twice a day," added ACP Shamsul Amar.

He said everyone who had come into contact with the four people will undergo the real-time reverse transcription-polymerase chain reaction (RT-PCR) test.

The detention of the undocumented migrants was also carried out according to the standard operating procedure (SOP) stipulated by the Health Ministry, he said.

Meanwhile, Klang MP Charles Santiago said policemen from the station and their family members must all be tested and quarantined.

"Other detainees should also be tested and the police must give an update once the tests are done to notify the public, especially Pandamaran residents, who are concerned about their safety," added Santiago. Michigan judge sides with open-carry of firearms at polling stations 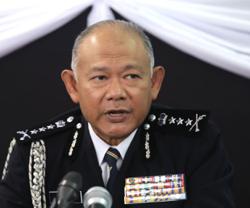