JOHOR BARU: A top British international school located in Iskandar Puteri is at risk of closing down after eight years due to the impact from the Covid-19 pandemic, says Datuk Hasni Mohammad (pic).

The Johor Mentri Besar said the school’s students, numbering between 800 and 900, could not commute daily between their school and Singapore due to the border being closed.

“I received a letter from the school asking for help from the state government to find a way to allow their students to travel daily to attend classes.

“In the letter, the school also described the challenges they are going through, where they are facing the possibility of having to shut down, as they are unable to operate as usual," he added.

Hasni said this in his speech during the Johor media club annual general assembly meeting held at a hotel here on Thursday night (Sept 17).

He said it would be a huge loss for Johor if an international-level education institution had to cease operations.

According to the Mentri Besar, the state would be discussing the matter with Putrajaya soon.

He said he would be meeting with Prime Minister Tan Sri Muhyiddin Yassin and will urge the Federal Government to speed up discussions on reopening the border with Singapore for daily commuters.

In another matter, Hasni said Wisma Putra would be presenting a paper to the Cabinet soon on the opening of a Johor government office in the island republic that focuses on economy, trade and culture.

"We believe that with our presence in Singapore, we would be able to explore more collaboration between us and them.

"Our interest with Singapore is not limited to only trade matters but also in other areas such as water resources and water boundaries. 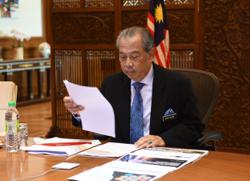