“This can be done, I am confident that I can do it. The Sandakan Port is under the jurisdiction of the Sabah government (Sabah Ports), and is not under the Transport Ministry (MOT).

“But if I am given the mandate by the people, I will forward a proposal to the Finance Ministry for approval, ” said Chew who is in a seven-cornered fight for the Karamunting seat.

He said it was important for the state and federal governments to work together to achieve development.

Chew said that the creation of FTZ at the Karamunting port here would have a positive impact to the economic activities in Karamunting because it would bring in visitors, both locals and non-locals, to the area.

It would also act as catalysts to other developments such as logistics, tourism and warehouse management among others, said Chew.

The Batu Sapi MCA division chief said that with his experience as former Bintulu Port Authority deputy chairman (from 2015-18), he was confident of putting the plan in action as he had already looked into the creation of the FTZ for Sandakan Port.

“If implemented, FTZ will see a certain radius around Sandakan Port become tax free, ” he said.

Speaking to reporters at Bandar Nam Tung here on Thursday (Sept 17) he said the plans were part of his six-point election manifesto.

Chew also hopes to promote e-commerce by putting in place better Internet connectivity in the constituency while also creating centres for youths to engage in trading and business activities.

“We see the importance of e-commerce especially during the movement control order (MCO) period, in which people are still able to generate income through online businesses even when they are at home, ” he said.

Among other areas, he said he hoped to develop a traditional Kampung Pukat water village as a homestay that could help in attracting tourists while generating revenue for local folk.

“I want Karamunting to be known for having the best water homestay in Sandakan, ” he said.

Among others, Chew wants to upgrade and transform Pasir Putih beach into a recreational beach while also putting in place programmes to improve the existing medical facilities in Karamunting.

“I see the need to add more health clinics to ensure Karamunting folk have access to high quality healthcare services and facilities, ” he added.

He also wants to increase affordable homes for the youths.

“There is not one low-cost residential housing in Karamunting. Some of the people here are living in dilapidated houses. So there is a need to build more affordable homes for them, especially those who are from the lower income group, ” he said.

Chew said the people here still remember and appreciate the contribution of the Barisan government over the years and hope that the locals will give him a chance to prove to them that he can bring better changes to Karamunting.

Wee said even though the response from the local folk on Chew has been positive so far, the party cannot let their guard down.

“Chew must continue to work hard to get close to as many voters as possible to win their hearts and votes. The Karamunting seat has six candidates and every candidate has a chance of winning the state election.

“As for the house-to-house campaign, we found that the residents are very friendly and all want Barisan to return to administer the state, ” Wee said. 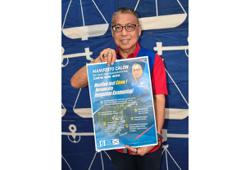