She said her ministry needed to be more stern to prevent delays and non-compliance of specifications.

"According to the audit report which was presented in Parliament, from 2013, there were several PPRs where developers did not complete the projects according to the schedule and did follow the specification that resulted in defects.

"This is very sad. From now on, we are going to be very strict with developers," she said on Thursday (Sept 17) after attending a groundbreaking ceremony for Seduan PPR in Sibujaya.

She said immediate action will be taken the moment a PPR project is delayed.

"If defects are minor, that is understandable, but not those that are serious as it will pose a huge loss to the government," she said.

Zuraida said a special monitoring committee for PPR projects nationwide had been formed and will be helmed by the ministry's deputy secretary-general.

The committee will meet twice a month and must report the progress of projects.

Meanwhile, she said PPR Seduan was the first project she had launched during this Covid-19 pandemic period.

"I hope this one will be the model for other PPRs in the country with good management," she added.

The project of 461 units of single-storey terrace houses is scheduled for completion in 40 months’ time. 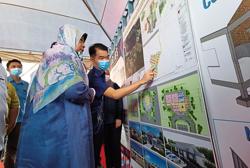