KOTA KINABALU: The son of one of Malaysia’s founding fathers, the late Tun Mustapha Harun, is making a comeback through the northern Sabah seat of Banggi.

Datuk Amir Kahar Mustapha wants to revive his family name and is hoping to be the next chief minister of Sabah.

Even his wife Datuk Aminah Ambrose is joining in the fray as an independent as well.

Amir Kahar noted that his father was among those who fought for Sabah’s independence together with Tun Fuad Stephens.

“I want to continue with my father’s legacy,” said Amir Kahar, the only politically active son of Mustapha who was dropped as a Barisan Nasional candidate under Umno for Banggi in the 2008 general election.

His vision, said the 70-year-old, was to bring Sabah out of poverty.

“If I become Sabah Chief Minister after this election, the first thing I will work on is make Yayasan Sabah the foundation it was formed for, which is to help the people,” said Amir Kahar.

He added that he and his wife made a joint decision to contest as independents.

Aminah, 62, who is caught up in an 11-cornered fight for Bengkoka, said they only decided to go in as independents at the last minute after she was not named a candidate for Banggi by Sabah Bersatu.

“There was perhaps a good reason for the leadership to not include me.

“So I decided to go my own way to pursue my dream of helping the people. We are capable of leading and representing the people. My husband and I have been on the ground with the grassroots for many years,” said Aminah, who has five children and seven grandchildren.

She considers herself a veteran in the field, having been involved in politics ever since her husband started his political career decades ago. 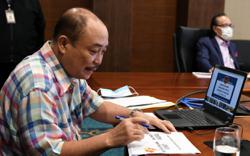