Thousands in rural Sarawak cut off from outside world as bad weather worsened. - Pic by State Disaster Relief Management Committee

MIRI: Thousands of people living in interior northern Sarawak and the rural parts of the central region have been cut off from the outside world as the bad weather worsened over the past 24 hours.

The latest reports from the Sarawak disaster relief management committee, the state Fire and Rescue Department and the Civil Defence Unit showed a widespread impact in many remote places.

In the Long Pillah settlement in Ulu Baram, seven hours from Miri city, the main road linking two dozen villages to the outside world collapsed from erosion.

About 2,000 people are unable to commute as there is no alternative road, and welfare authorities and local politicians have been alerted to their plight.

They are covered by about a metre of floodwaters, and key bridges in several locations were rendered unusable as rivers swelled and overflowed their banks.

About two dozen folks are affected and they have sought refuge in other homes in the neighbourhood.

In the Belaga district, populated settlements were hit by heavy rain that flooded the timber roads linking them to the highway.

Uma Kulit and Uma Sambop settlements (with about 3,000 people in total) are the worst affected.

SK Long Urun and Uma Pawa are also cut off from other settlements due to flooded roads.

The state disaster relief management committee secretariat said various agencies at the district level are looking into the welfare of residents and have deployed teams to the affected sites. 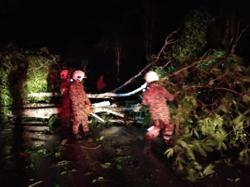