Seeking shelter: Residents affected by the floods in Kapit being evacuated in a boat by Fire and Rescue personnel. — Photo courtesy of Bomba Sarawak

MIRI: Evacuation of flood victims has commenced in Kapit while schooling has been halted in several areas in the interior of Miri due to rising floods.

The committee in its latest updates said Stadium Kapit has been turned into a flood-relief shelter.

“Evacuation by the Fire and Rescue Department is taking place.

“So far, 56 victims have been evacuated to Stadium Kapit.

“In Song district, SK Nanga Embuan has been turned into an evacuation centre and 126 victims have been placed there,” added the committee.

The state’s northern and central areas have been lashed by heavy rain since three days ago.

The worst-hit settlements in Kapit were Rumah Philimon longhouse and Kpg Muhibbah and Kpg Baru Kapit.

In northern Sarawak, schooling sessions in the Baram about 200km inland of Miri city have been affected by the rising floods.

SK Long Bemang is the worst-hit resulting in about 200 students having to leave their classes.

Other schools affected by the floods are SK Long Loyang, SK Long Lenei and SK Long Sobeng with a total of about 400 students.

The worst-hit settlement in Baram was Long Bemang with about 600 villagers in four longhouse blocks inundated by about 1m of water. 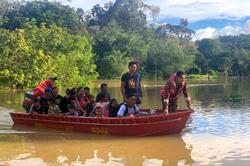 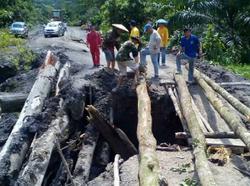