BUTTERWORTH: A total of seven individuals were slapped with a RM1,000 compound each for breaching the recovery movement control order (MCO).

He said the men are aged between 30 and 45 and were fined for not using the MySejahtera app and not recording their details before entering the premises.

"They have violated the government order and action has been taken under Regulation 10 of the Prevention and Control of Infectious Diseases (Measures within the Infected Local Areas) Regulations 2020," he said in a statement on Wednesday (Sept 16).

He said the MBSP issued a closure notice against one restaurant for failing to observe standard operating procedures (SOPs) such as practising physical distancing, failure to record their customer details and failure to ensure their employees wear facemasks.

He said that the MBSP issued compounds to one premises for not having a business licence while another premises was issued a notice to stop their business activities.

ACP Noorzainy added that the health department also issued warning notices to two premises owners over staff compliance regarding Covid-19 at the workplace.

Hawker, factory worker scammed out of over RM20k 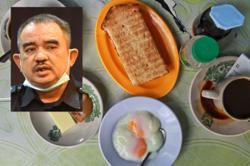