The dissatisfaction from some could be resolved if MA63 is recognised, said the 95-year-old, who was premier twice – once for 22 years, and the second time for a mere 22 months.

“I still remember the formalisation of Malaysia by Prime Minister Tunku Abdul Rahman at Stadium Merdeka on the morning of Sept 16,1963.

“I was 38 years old then," said Dr Mahathir in a Facebook post on Wednesday (Sept 16) in conjunction with Malaysia Day.

He added that while he was proud that then Malaya joined forces with North Borneo (now known as Sabah) as well as Sarawak and Singapore to form “one big Malaysia”, he was also nervous at the time.

"I was also nervous as the formation received some strong opposition from neighbouring countries. Thank God, today marks 57 years of the existence of Malaysia," he said.

Dr Mahathir added that Malaysia has endured much and come far.

"Singapore has left but the strength of the relationship between Peninsular Malaysia and Sabah and Sarawak has become stronger.

"In any big family, there will be dissatisfaction – and this has to be considered and a meeting point needs to be found so that our relationship does not break down.

“This is why we ask that MA63 be supported fully and we accept Peninsular Malaysia and Sabah and Sarawak as equal partners – Selamat Hari Malaysia," said Dr Mahathir.

In recent years, leaders from Sabah and Sarawak including MPs have asked for MA63 to be recognised by amending Article 1 (2) of the Federal Constitution to restore the status of the two states as associate members with Peninsular Malaysia, in line with MA63. 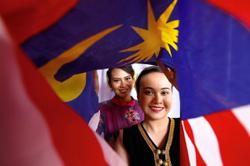