Seri Alam OCPD Supt Ismail Dollah said police received a report about red paint being thrown at the building and a note written in Chinese plastered at the office located on Jalan Ros Merah 3/2 in Taman Johor Jaya at around 1.30pm on Aug 16.

"A team of officers arrested three suspects in Negri Sembilan at around 12.30pm on Friday (Sept 11)," he said in a statement here on Tuesday (Sept 15).

Supt Ismail added that checks on the suspects, all Malaysians aged from 29 and 46, revealed they had criminal records, including for drug-related offences.

He added that the suspects have been remanded.

In an unrelated case, Supt Ismail said police arrested three foreigners who tried to bribe their way out of trouble after they were detained at a roadblock.

He added the incident happened on Monday (Sept 14) at around 12.30pm when five police personnel from Ulu Tiram police station stopped a four-wheel-drive vehicle for inspection at a roadblock at KM25 along the Johor Baru-Kota Tinggi road here.

"Two Bangladeshi and one Myanmar nationals, between the ages of 31 and 28, were in the vehicle.

"One of the Bangladeshi nationals had a fake i-Card while documents belonging to the other two suspects also looked suspicious," he said.

Supt Ismail said they were arrested and taken to the police station for further questioning.

At the police station, one of the suspects, the driver, offered RM1,000 to a policeman.

Supt Ismail added that the suspect and the seized money was handed over to the Malaysian Anti-Corruption Commission (MACC) for further investigation. 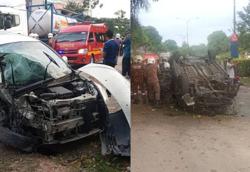