Johor looking to build 350m pedestrian passageway along the Causeway

ISKANDAR PUTERI: Johor is waiting for the Federal Government to approve a RM30mil allocation to build a 350m roofed pedestrian walkway along the 1km Causeway.

“We met with the Singapore Consulate-General and discussed the matter, during which the representatives indicated an interest in the project.

“The representatives told us to show them the proposal once the Federal Government approved it, so that they could bring this to the attention of the Singaporean government,” he told reporters outside the Johor state assembly in Kota Iskandar yesterday.

Solihan added that besides being roofed, the 350m walkway would have escalators and air-conditioning.

“We initially requested for a RM15mil allocation but we have since redesigned the facility to have a roof and escalators. We are now requesting RM30mil,” he said, adding that the proposal was submitted earlier this year.

Adding that there was currently no official data on the number of people walking across the Causeway, Solihan said people were not actually allowed to cross the border on foot as this could be dangerous.

“But we do not impose the restriction strictly,” he added.

Earlier, in a reply to Andrew Chen (Pakatan-Stulang), Solihan said the allocation would be under the Works Ministry as the Causeway was under the maintenance of the Malaysia Highway Authority.

“However, with the support of everyone, including all the elected representatives, I believe we can go through it together.”

Besides the stimulus package, five other motions were also approved, including the appointment of Tanjung Piai Umno division chief Datuk Jefridin Atan as senator.

“This nomination should be either you agree or disagree instead of picking another nomination,” he said.

Later, Parit Yaani assemblyman Aminolhuda Hassan, who is also the state Pakatan chief, said the Opposition was disappointed with Jefridin’s appointment as they were not informed earlier. 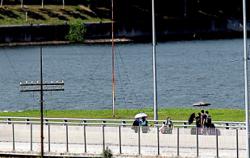 Singapore keen to extend proposed walkway on its side of causeway