Salleh and Pandikar looking for political comeback in Sabah polls

Salleh, a former chief minister and federal minister, is making his comeback bid through Barisan Nasional, will be in a three-cornered fight for the Usukan state seat, while Pandikar, the former Dewan Rakyat speaker, is contesting the new Pintasan seat through Usno.

Picked by Umno to contest the seat, he is returning to his family’s decades-old stronghold which he lost in GE14 to Warisan for the Kota Belud parliamentary seat.

Salleh had previously held the Usukan seat and was Sabah chief minister 1995-96. In 2013, he contested the Kota Belud parliament seat and was a federal minister in Datuk Seri Mohd Najib Tun Razak's cabinet till 2018.

Having been partyless after leaving Umno in 2018, he is now seen as a key factor in balancing Sabah Umno following the move to drop former chief minister Tan Sri Musa Aman as a candidate.

Pandikar, a veteran Sabah politician, is in a six-cornered fight where his main contender is Mohd Saffian Saludin from Warisan. 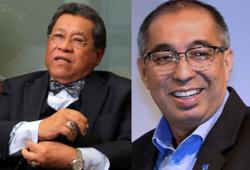