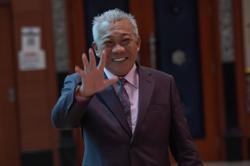 KOTA KINABALU: Sabah Umno chief Datuk Seri Bung Moktar Radin stamped his mark as party leader when, in naming his candidates, he dropped one former chief minister and brought in another.

Bung Moktar, who has opted to contest the Lamag seat, said the party would also be contesting Bengkoka, Telupid, Kemabong, Kuamut and Paginatan that are seeing candidates from its Perikatan partners – Sabah STAR and Parti Bersatu Sabah (PBS).

“We can have a friendly contest, ” the Kinabatangan MP told reporters as it was becoming evident that no deals were struck in resolving the deadlock over five of seven contentious seats between Sabah Umno and the two local-based parties.

However, Umno and Perikatan’s Sabah Bersatu seemed to have struck a clear deal, with none of the seats overlapping.

In total, Sabah Umno, which will be contesting under the Barisan banner, is fielding candidates in 31 of the 73 state seats for the Sept 26 polls.

His is also a controversial return as he had left Umno in 2018 to join Bersatu but was rejected and failed to join PKR before reapplying to rejoin Umno.

As for Musa, whom sources said was a making a last-minute bid to get the new Sungai Manila seat that was carved out of his Sungai Sibuga state seat, his attempts to come back either via Umno or Sabah Bersatu have failed.

“He never applied to Barisan to be a candidate, ” Bung Moktar said when asked by reporters.

“We have about 95% new faces, ” he said, adding that Barisan’s partners Parti Bersatu Rakyat Sabah (PBRS) and Sabah MCA would announce their candidates later.

“We are a team with Bersatu and other coalition parties, ” he said.

Instead of fielding Musa in a seat which he has defended for six terms since 1994, Barisan will be fielding newcomer Mohamad Hamsan Awang Supain and has also put another new face, Mokran Ingkat, in Sungai Manila.

Bung Moktar said they were confident of becoming part of the next state government.

The announcement of candidates was done separately with Sabah Bersatu, Sabah STAR and PBS scheduling it at different hours of the day.

Umno and Bersatu leaders held a gathering prior to their separate announcements where both Bung Moktar and Sabah Bersatu chief Datuk Mohd Hajiji Noor advised members and the election machinery to work together towards victory regardless of the candidates.

Hajiji said Bersatu and Umno were from the same team once before and this election was a golden opportunity to unseat Parti Warisan Sabah.

Meanwhile, Bung Moktar said that not everyone could get a seat and what was more important was for all to work together to win the election. 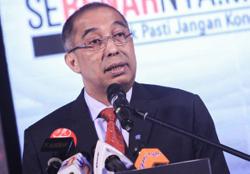