MELAKA: Melaka's top cop has urged a DAP lawmaker to lodge a police report over his claims on mistreatment by cops.

State police chief Deputy Comm Datuk Mat Kasim Karim said he will ensure a fair investigation is initiated once the report is lodged.

He was commenting on allegations by Kesidang assemblyman Allex Seah Shoo Chin that the latter was directed to take down a Melaka legislative assembly’s car insignia during a roadblock at Krubong here by two policemen.

"As long as I know the incident was unprecedented and I would issue an official statement on this matter," he said when interviewed on Thursday (Sept 10).

Seah had alleged that he was taken aback when two policemen manning the roadblock asked him to remove the insignia on Sept 2.

“I flashed my identification card to tell them that I am a serving assemblyman but they still demanded a letter from the assembly’s administration unit.

“It’s an insult for a lawmaker like me when I was asked to take down the insignia on the spot,” he said on Wednesday (Sept 9).

Seah said he told the policemen that he was willing to cooperate by handing over any documents to their superiors.

Seah said he had also alerted Melaka Chief Minister Datuk Seri Sulaiman Md Ali and to get his blessing on highlighting the incident. 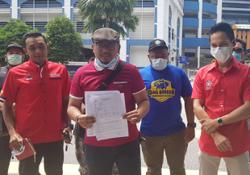