JOHOR BARU: The most senior assemblyman in the Johor State Assembly has called upon his fellow elected representatives to keep a cool head during the next meeting.

The Bukit Permai assemblyman Tosrin Jarvanthi (pic) urged his colleagues on both sides of the divide to put Johor first. 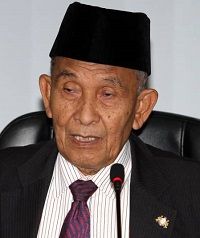 “Let us leave behind any political squabbles for the future of this state and its people.

"We should all work together for Bangsa Johor and not follow our party politics as it can threaten the state legislative assembly institution, ” said the 70-year-old from Parti Pribumi Bersatu Malaysia (Bersatu).

The Johor state assembly is set to meet on Thursday (Sept 10) and Sunday (Sept 13), with five motions being tabled between the two dates.

Prime Minister Tan Sri Muhyiddin Yassin, who is the Gambir assemblyman, will be attending the state assembly on both dates.

The motions involve a state economic stimulus package to help spur Johor’s economy and its people in the wake of the Covid-19 pandemic, the appointment of senators, the additional budget and a rebate on land tax.

However, attention will also be focused on former mentri besar and Kempas assemblyman Datuk Osman Sapian, who has been seen in viral videos attending programmes organised by Parti Pejuang Tanah Air (Pejuang).

He is expected to be hauled up by Bersatu’s disciplinary board after the state assembly meetings.

Osman may have his Bersatu membership terminated after two viral videos showed him campaigning on behalf of an independent candidate during the Slim by-election and attending a dinner by Pejuang.

The 69-year-old Osman could force the state assembly to be hung if he decides to quit the party.