GERIK (Bernama): A wild elephant that was reported wandering in the Titiwangsa Rest and Service (R & R) area near here for the past several days ago has been driven back into its habitat nearby.

Gerik OCPD Supt Zulkifli Mahmood said the action to drive back the animal was conducted by the state’s Wildlife and National Parks Department (Perhilitan).

"The wild elephant often entered the area, possibly to look for food, but it did not disturb anyone," he said when contacted by Bernama here Tuesday (Sept 8).

Supt Zulkifli said police had asked road users not to use their vehicles’ horns and turn on their lights to prevent a rampage by the elephant.

"This is because elephants are very sensitive and can endanger the public if they go amok," he said.

At 10pm Sunday (Sept 6), the public at the R&R area were alerted to the presence of a wild elephant that tried to enter outlets to seek food as well as toppling garbage bins in the area.

No injuries involving the public or damage to vehicles were reported. - Bernama 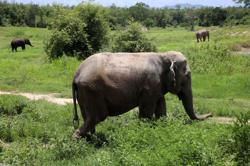