He said the actual cause of the incident is still being investigated by the Land Public Transport Agency (Apad).

“I want to know what caused the trains to brush, whether it was negligence or if it was caused by mechanical failure or system glitch. We will investigate to identify why it happened, ” he said after presenting star ratings to driving institutes on Tuesday (Sept 8).

Dr Wee is expecting a report from Apad on the incident soon.

The other 29 passengers of the commuter train and the 93 ETS passengers were unharmed in the 6.37pm incident.

Both trains were going in the same direction.

The KTM Komuter train was on its way to the Sungai Buloh station from Tanjung Malim, while the ETS was heading to the Kuala Lumpur Sentral station from Padang Besar. 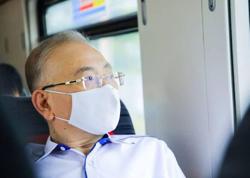 ETS to expand to the south of Peninsular Malaysia