In closed-door meetings at PBB's recently concluded northern Sarawak assembly here in Miri, PSB was mentioned numerous time as being a credible threat to PBB.

"Even PBB president Datuk Patinggi Abang Johari Openg stressed that PBB's election machinery on the ground must keep close watch on PSB in the run-up to the state elections.

"PSB is made up of largely former GPS colleagues during Sarawak Barisan Nasional era.

"PSB have in their ranks former ministers and assistant ministers as well as grassroots chiefs who were once with Sarawak BN.

"They know PBB and GPS well. In northern Sarawak, PSB are real threats to PBB in places like Marudi, Mulu and Baram," a PBB source told The Star Monday (Sept 7).

PBB is in the midst of holding four regional general assemblies in the run-up to the 12th Sarawak state elections.

The regional assemblies will be held next in Sibu, Betong and Kuching, after the Miri assembly was held over the weekend.

There has been talk of a snap polls this November with the current state assembly term ending in June next year.

Sources in GPS told The Star that Johari had spoken to the Election Commission on this but no date has been fixed yet for dissolution of the state assembly.

Sarawak was the only state that held its state election separately from parliamentary polls.

Sarawak have 82 state constituencies and 31 parliamentary seats and out of the 82 state seats, GPS controls 68, while Sarawak DAP have five.

DAP had seven seats but its assemblyman in Pujut - Ting Tiong Choon - was disqualified by the Federal Court over citizenship issues and the seat declared vacant.

Another assemblyman - Wong King Wei of Padungan - resigned from DAP over party issues and became an Independent.

Sarawak PKR had three seats but two assemblyman left to join PSB, which previously had four representatives but now has six. 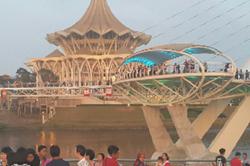