JOHOR BARU: Three unemployed men escaped the gallows after the High Court here found them not guilty over the murder of a businessman at a petrol station some three years ago.

Gan Jia Ji, 22, Yip Kah Hou, 26, and Woon Kian Hui, 25, walked away from the courtroom as free men after the court ruled that the prosecution failed to prove a prima facie case against them.

According to the charge sheet, Gan and five other suspects that are still at large allegedly murdered Tan Aik Chai, 44, at a petrol station along Jalan Sri Pelangi in Taman Pelangi here at around 7.30pm on Dec 17,2017.

He was charged under Section 302 of the Penal Code, which carries a mandatory death sentence upon conviction.

Meanwhile, Yip and Woon were accused of abetting the murder together with two other suspects that still remain at large.

Both of them were charged under Section 302 of the Penal Code read together with Section 109 and Section 34 of the same Act, which carries a mandatory death sentence upon conviction.

In giving her decision, Judicial commissioner Dr Shahnaz Sulaiman said the prosecution failed to prove a prima facie case against the three accused.

She added that the eyewitnesses at the petrol station could not identify the accused while the close circuit camera (CCTV) images were blurry.

“The prosecution also failed to connect the white BMW car with the murder, ” she said before acquitting and discharging the three. 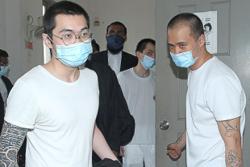