Science, Technology and Innovation Minister Khairy Jamaluddin said the government should amend the Water Services Industry Act 2006 and the Environmental Quality Act to provide harsher penalties for those who pollute water sources.

“Water sources should be categorised under the security of the nation. It will be brought to the Cabinet, ” he said in a tweet on Friday (Sept 4).

Earlier, Selangor Mentri Besar Datuk Seri Amirudin Shari said a factory believed to be the cause of the problem has been closed down and impounded.

The factory was fined RM60,000 in March for a similar offence.

Many took to the Air Selangor Facebook page to state their grievances, saying that water cuts were happening too often in the Klang Valley.

Zaidi Sihot said the factory should be shut down for good.

“A compound is nothing for them, they will just pay it. The government must be stern. Because of profits, the people are the victims, ” he said.

Delia Duarte wanted the factory to be closed forever, with the owners sued and put into jail

Rizal Bahrom said the people should sue the factory and make police reports against it for causing economic losses.

Subsequently, odour sampling was conducted near the Sungai Gong industrial area, which is believed to be the source of the problem.

On Friday, Air Selangor chief executive officer Suhaimi Kamaralzaman said it would take at least four days for water supply to be restored, once the four water treatment plants that were shutdown on Thursday due to odour pollution, resume operation.

Over 1,200 areas in Klang Valley affected by unscheduled water cut 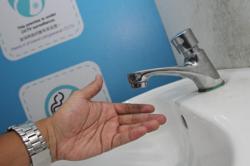