INVESTING: Gold is not all that glitters

THE onset of the Covid-19 pandemic brought about much doom and gloom. Words such as “recession” and even “depression” hugged the headlines as people scrambled through an uncharted black swan event.

Most recessions are brought about by excesses but in combating Covid-19, the world inflicted a forced economic shutdown on itself to contain the spread of the disease. Hopelessness took over as people were worried about their jobs, wealth, and health.

But there is a lesson from the past that repeated itself this time as it did in 2008. Massive amounts of stimuli into global financial markets were a lifebuoy for investors.

Interest rates were slashed to historic lows and the huge amounts of money started lifting asset prices around the world. The sea level of asset classes from equities to bonds immediately were lifted but hurt economies meant that there was one asset class – a hedge against the unknown – gold that saw active interest.

The buying of gold and other precious metals acts as a hedge. When people are fearful of a massive loss of wealth, gold is seen as a preserver of wealth.

It offers no intrinsic returns unlike stocks and bonds other than not to lose money.

Sure, if one had bought gold a couple of decades ago, they would be in the money in a big way today.

But that return would pale in comparison to what blue chips on Bursa Malaysia have returned. Investing in Malayan Banking Bhd would have delivered a far better profit, and the propensity for a stock like Maybank to generate dividends over a longer term would only add to its attractiveness.

Plus, the returns from investing in gold would only be a whimper in what some of the large tech stocks like Amazon had delivered over that same time.

So, should people rush into investing in gold as protection against the uncertainty? No, as indications are that the world is mending itself.

Covid-19 cases have stubbornly persisted and a second wave would cause more economic harm. But a vaccine is close to being developed and once a safe inoculation is found, the world will start getting back to the old normal once again.

That means the risk of great wealth loss would diminish and likewise, the allure of gold would fade too. Gold would likely get back to what it was prior to the uncertainty, and once again the adage of buying low and selling high, especially when equities would start to perform, would very likely hold true. 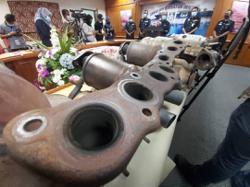