Cop pleads not guilty to CBT charge involving over 190k

IPOH: A police inspector claimed trial at the Sessions Court here to committing criminal breach of trust involving over RM190,000 six years ago.

Sahrol Zaman Mohd Adom, 38, pleaded not guilty after the charge was read out by an interpreter before judge Mohd Fauzi Mohd Nasir.

He was charged under Section 409 of the Penal Code, which carries a jail term of up to 20 years, whipping and a fine upon conviction.

According to the charge sheet, Sahrol Zaman, in his capacity as an investigation officer with the Ipoh District Police headquarters, was entrusted with items seized from a Simpang Pulai case that involved cash amounting to RM190,721.

He is alleged to have committed the offence at the headquarters of the criminal investigation department’s store, where the seized items were kept on April 11, 2014.

Deputy public prosecutor Nur Farhana Hashim said in view of the severity of the offence, she was requesting for a higher bail.

Sahrol Zaman’s counsel said his client had his parents, wife and 12-year-old twins to take care of.

The court set bail at RM8,000 with one surety and fixed Sept 25 for mention. 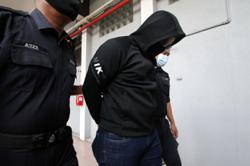