GEORGE TOWN: A 31-year-old unemployed man, who was involved in an incident where a woman was left with her legs dangling out of a moving car, has been released on police bail as he is suffering from dengue fever.

Police bail is the process by which an arrested person is released from detention without the need for a bail bond or surety and after promising in writing to show up in court later when told to.

George Town OCPD Asst Comm Soffian Santong said investigations had been completed and the case would be referred to public prosecutors as soon as possible.

“Investigations found that the fight was due to family matters,” he said yesterday.

He said the suspect was picked up near Patani Road at 12.15am on Sunday, two hours after the woman lodged a police report.

The case is being investigated under Section 323 of the Penal Code for causing hurt and Section 18 of the Domestic Violence Act 1997.

On Saturday, a viral video that lasted nearly two minutes shows the car allegedly driven by the suspect swerving from side to side, with a pair of legs jutting out of the open front passenger door.

Motorists watched in horror as the woman’s legs dangled out of the moving car in Jalan Dr Lim Chwee Leong here.

After one minute and 40 seconds in the video, the woman is then seen pushed out of the vehicle.

ACP Soffian said the suspect had a criminal record for a drug-related offence. 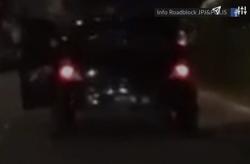 Couple’s domestic dispute plays out on the road