Mukhriz’s daughter lauds cops for professionalism after being arrested (updated)

Alyanna, who was arrested together with her husband and others at a pub last week, said the police officers had been courteous and fair towards everybody who had been rounded up and ultimately fined RM1,000 on Aug 21.

"I have the utmost respect for their professionalism," she posted on her Instagram account under the handle ally.mukhriz. 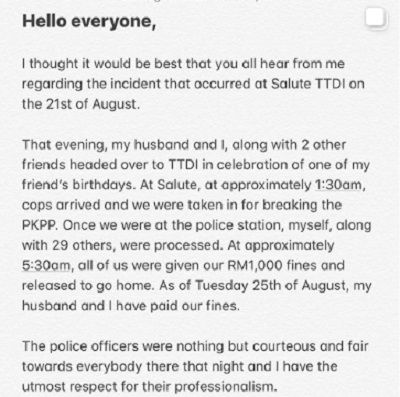 "I thought it would be best that you all hear from me regarding the incident," she wrote.

Saying there was absolutely no excuse for her actions, she added, “I am also deeply ashamed at what my indiscretions have brought upon my family, my friends and all of you.”

She added that she had gone to the pub Salute, in Taman Tun Dr Ismail in Kuala Lumpur, with her husband Ezran Daud Cheah and two others to celebrate a friend's birthday.

She said the police rounded up 30 people including herself at 1.30am for breaking the recovery MCO. They were all released at 5.30am the same day.

Alyanna and her husband paid the fine on Aug 25. 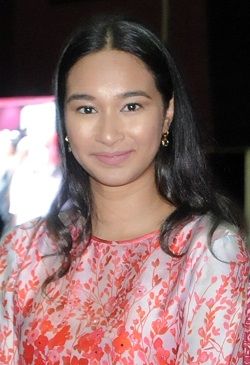 News first broke earlier this week that a VIP’s daughter had been arrested for flouting the MCO.

On Thursday (Aug 27), Mukhriz – who is also the president of the yet-to-be-registered Parti Pejuang Tanah Air founded by Dr Mahathir – admitted it was his daughter and son-in-law.

Mukhriz said he was disappointed that it happened despite having advised his family to adhere to the standard operating procedure (SOP) during the recovery MCO period.

''I'm disappointed because it still happened. And since advice was given, they deserve to be fined, ” he added.