AN emergency motion to debate the recent move by the Philippines to feature the country’s map that includes Sabah in the Filipino passports was approved in Parliament.

“After considering the motion, I am satisfied that it fulfils the requirements of being a specific issue, of public interest and an urgent matter,” Mohd Rashid said when ruling on Liew’s motion yesterday.

Mohd Rashid, however, said that the motion would be debated in the Dewan Rakyat’s Special Chambers.

In tabling his motion, Liew noted that Sabah was part of Malaysia but the move by the Philippines was a threat to Malaysia’s sovereignty.

“The House urges Wisma Putra to strongly protest against the move by the Philippines to safeguard national pride and sovereignty,” Liew added.

Last week, Philippines House Committee on Foreign Affairs had approved a Bill seeking the printing of the Philippines map through an amendment that includes its 200-mile exclusive economic zone (EEZ) and Sabah, on Philippine passport.

According to news reports quoting Philippines Cagayan de Oro City Rep Rufus Rodriguez, the move “aims to emphasise and insist on our victory on the West Philippine Sea over China in the International Arbitral Tribunal in The Hague, Netherlands, and our legal and historical rights over Sabah”.

“The inclusion of the map on our travel document is a strong statement that we are asserting our sovereign rights over the West Philippine Sea and our EEZ,” he was quoted by news organisations. 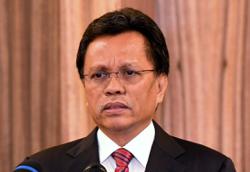