KUANTAN: The Kuantan High Court has granted a stay on enforcement of action against the illegal durian farms in Raub.

Lawyer Siew Choon Jern, who represented 111 durian planters, said they have filed an application for a judicial review on the decisions to lease the plantation land to a joint venture company and to evict the planters.

"The Attorney General's Chambers needs time to go through our application and affidavits. We have no objection, as it is only fair for them to have some time to read it.

"At the same time, we applied for a stay on the authorities' decisions, especially the order to evict the durian planters from the land.

"The Attorney General's Chambers and the court have no objection after hearing a brief submission, and so the judge allowed the stay until the next hearing date on Oct 28," Siew told reporters here Friday (Aug 28).

Among others, the applicants are seeking a judicial review on the notices issued to evict them from the lands in or around Sungai Ruan, Sungai Chalit, Sungai Klau, Tranum, Tras and the Gunung Benom forest reserve.

The applicants also want a judicial review on the state government's decision to award a lease and rights to use 2,167.9 hectares of land in Raub to Royal Pahang Durian Resources PKPP Sdn Bhd for a period of 30 plus 30 years, as well as the mandatory requirement that they sell their durians to an entity nominated by the joint venture company. 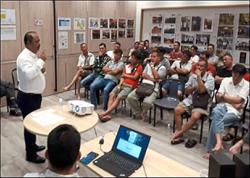