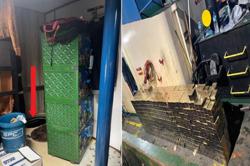 PETALING JAYA: Former Umno MP Tawfik Ismail has volunteered to contest in the next general election, although this time, it will be under an independent platform.

Tawfik, who was Sungai Benut MP from 1986 to 1990, said that he would however have to undergo stringent vetting by the Malaysian Action, Justice and Unity Foundation (Maju).

If the 69-year-old passes the vetting, he will contest under the Gerak Independent platform, an initiative by Maju and other like-minded non-governmental organisations.

“There are lots of things that need to be put forward to make the nation stronger and united. The current batch of MPs are in the eyes of the public, and are found to be wanting, because of party hopping.

“There appears to be no principles in politics. The ideals for nation building and national integration do not seem to be a matter of priority, ” he told The Star on Thursday (Aug 27).

He said that parliamentarians have to be conscious of the effect of their words on the public and be conversant with the Federal Constitution.

Tawfik, who is also known to be a moderation advocate, added that there was a need to strengthen integration between West Malaysia and East Malaysia.

“I left politics disillusioned by what they represent but I think it is time for Malaysians who truly want to serve to make a stand for the sake of our nation and our next generation, ” he said.

Tawfik said that Maju would look at different constituencies where incumbents could be replaced as voters were looking for new faces.

Maju said they are spearheading a movement to deliver a target of 15 independent Members of Parliament for the next election who will not be beholden to any political party or their warlord.

Maju was founded in January 2019 as a platform to advocate for a liberal and progressive Malaysia.