Muhammad Saiful Iskandar Kassim pleaded not guilty after the charges were read out to him before Sessions Court judge Azura Alwi here on Thursday (Aug 27).

According to the charge sheets, the accused obtained RM2,000 for himself in three transactions from Mohd Nazim Ariff Nazir Ariff, a contractor, through wire transfers into his Maybank account.

The monies were allegedly an inducement to speed up the process of payment for a contract involving the transportation of fertilisers from Nafas warehouses.

The offences were said to have been committed in Dataran Maybank on Jalan Maarof between Dec 10,2015 and Feb 26,2016.

The charge under Section 16(a)(A) of the Malaysian Anti-Corruption Commission Act 2009 provides a maximum 20 years imprisonment and fine of no less than five times the amount of gratification or RM10,000, whichever is higher, upon conviction.

However, the accused, who was unrepresented, pleaded for a lower bail on grounds that he was the family's breadwinner and has nine children.

"I have to support my family including my mother. Since this case, I have been demoted at Nafas to a monthly income of RM5,000," said the accused who is now a cooperative manager.

The court fixed bail at RM20,000 in one surety and ordered for the accused to surrender his passport and report to the MACC office monthly.

The case is set for mention on Sept 25. 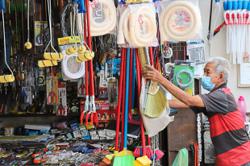