PBS wants to contest in Paginatan at Sabah polls next month Abidin was among 16 assemblymen who jumped out of the Parti Warisan Sabah Plus government to join Tan Sri Musa Aman's camp before this.

Paginatan PBS chief Datuk Dr Othman Minuddin said the constituency will be one of the seats contested in line with the decision from the party's supreme council meeting on Aug 8.

The party, therefore, is forming a N38 Paginatan election machinery, he said in a statement Tuesday (Aug 25).

"Paginatan PBS has done outreach programmes to villages and most of the grassroots want PBS to represent them.

"With 73 branches and 7,000 members which are growing, we are confident of PBS' chances in winning this seat," he said in the statement.

Othman said PBS has been fielding candidates in all state constituencies under the Ranau parliamentary seat since 1985.

"However, after PBS joined Barisan Nasional in 2002, it decided not to contest Paginatan during the 12th General Election (2004) and give way to another BN component party (Upko) at the time.

"Since Upko is no longer an ally of PBS (after leaving Barisan in support of Datuk Seri Mohd Shafie Apdal in 2018), it is time for PBS to recontest in Paginatan," he added.

He believed they would have to face Upko which is expected to field their candidate as part of the Warisan Plus team.

Othman said they are aware that their ally Parti Solidariti Tanah Airku (Star Sabah) is also eyeing to contest there, but hoped that they would instead give way to PBS this time."If a deal can be reached so that Paginatan Star Sabah division would back PBS in fielding its candidate, then we could return the favour and support them in areas we will not run," he said. 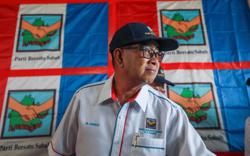