"The rakyat sees that there is a double standard in enforcement.

"The normal rakyat such as the pink wristband woman was fined more than five to 10 times the amount while the minister is protected," Mahfuz said when asking Minister in the Prime Minister's Department Datuk Seri Mohd Redzuan Md Yusof a supplementary question on enforcement and compliance of Covid-19 movement control order (MCO) regulations.

Mahfuz also said that Senior Minister Datuk Seri Ismail Sabri Yaakob had previously announced in early August that those flouting quarantine would no longer be compounded but hauled to court.

Azeez interjected and reminded Mahfuz that the minister had gone to Turkey to save the nation by bringing in RM82bil in investment.

"The minister should be praised and not vilified," Azeez was heard shouting as Dewan Rakyat Deputy Speaker Datuk Mohd Rashid Hasnon called for order in the House.

In his reply, Redzuan denied there was a double standard in enforcement of Covid-19 regulations.

He informed lawmakers the government would consider increasing the amount for compounds for non-compliance if necessary.

"A decision and announcement will be made if the compound amount is to be increased to ensure that people are more sensitive to the current situation," he said.

Khairuddin was said to have returned from Turkey on July 7 on an official trip and had undergone several Covid-19 tests with results returning negative for the virus.

Last week, Seputeh MP Teresa Kok raised the issue in Dewan Rakyat, claiming that the minister did not undergo the 14-days quarantine after returning from abroad but was seen attending Parliament on several occasions instead.

On Saturday (Aug 22), the Health Ministry said it issued a RM1,000 compound to Khairuddin on Aug 7, of which he paid.

The minister has since gone on the record to say that he would donate his ministerial salary from May to August to the Covid-19 Fund under the Health Ministry.

Bandar Kuching MP Dr Kelvin Yii Lee Wuen, at a press conference in Parliament, called on the Health Ministry to make recommendations to police on their investigation into Khairuddin.

"What are the Health Ministry's recommendations to the police?

"Although it is a police investigation, the Health Ministry has the power to give its recommendations as this is a serious issue," he told reporters.

Yii said this will ensure that the issue is not "swept under the carpet" by the authorities.

"The issue was not raised by the Pakatan Harapan Opposition but by the rakyat who felt that there was a double standard in the case.

He also said there was the perception that Khairuddin was trying to buy his way out of the issue by offering to donate four months of his salary after flouting the quarantine regulations.

No-one is above the law, says Deputy Health Minister

Khairuddin under probe for breaking quarantine 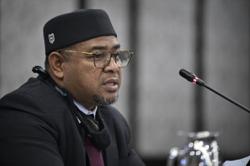