KUALA LUMPUR: A food delivery rider was killed when he crashed his motorcycle into the back of a lorry at the Besraya Expressway here.

The lorry was stopped on the left lane with its hazard lights on after experiencing some tyre trouble at about 6.45am on Tuesday (Aug 18).

Kuala Lumpur Traffic Investigation and Enforcement Department chief Asst Comm Zulkefly Yahya said the motorcycle rider crashed into the back of the lorry some 10 minutes after the vehicle had stopped.

"The rider, identified as Muhammad Faizal Yahya, 29, died at the scene due to a serious head injury," he said when contacted on Tuesday.

Initial checks on the lorry driver revealed that he was not driving under the influence of alcohol.

"His blood and urine samples have been sent for chemical analysis," ACP Zulkefly said.

He added that the case has been classified under Section 41(1) of the Road Transport Act 1987 and police are investigating the matter further. 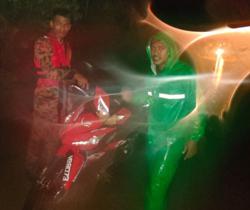