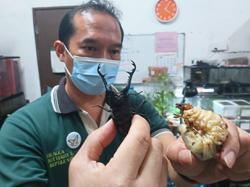 MELAKA: The Melaka Butterfly and Reptile Sanctuary in Ayer Keroh welcomed five baby anacondas after discovering that Jasmine, its resident green anaconda, had given birth to 14 snakelets on Aug 12, five of which survived.

The green anaconda or Eunectus murinus, a predominantly aquatic snake, is arguably the largest snake species in the world and gives birth rather than incubates its eggs.

The sanctuary's managing director Gerard Wong Woon See said the South American snake was shorter than the reticulated python but was thicker and heavier.

"Although Malaysia's reticulated python is longer, anaconda outcompetes it on the basis of girth and sheer mass," he said on Sunday (Aug 16).

According to Wong, mature females can reach up to 9.7m in length and weigh up to 200kg, while the males were much smaller.

He said his team discovered a total of 14 young anacondas around the water area within the enclosure of the sanctuary on Aug 12.

"Of the total 14 young snakes, nine were fully-developed stillborns (dead) and only five were alive," he said.

Wong said the five baby anacondas were subsequently transferred to the quarantine area to be specially cared for by in-house zoologists.

"These new anaconda babies will go on public viewing on National Day," he said.

Wong said the snakelets were the offspring of Jasmine, a 16-footer that was imported by the sanctuary in May 2015.

"It was kept together with another smaller female by the name of Amber in an enclosure with 65% water area complete with plants," he said.

Wong said Jasmine refused to feed for close to six months upon arrival at the sanctuary.

"Complicated force-feeding procedures were utilised by my team as Jasmine’s conditions deteriorated," he said.

From the sixth month onwards, however, Jasmine started to feed and hunt by herself. A male anaconda was introduced into the female enclosure on July 3,2019, Wong said.

"Jasmine and her partner were often spotted spending time together, although no mating activities were ever observed or recorded in the beginning," he said.

Wong said his team suspected Jasmine was bearing live youngs when it stopped feeding from November 2019 but retained its body mass.

He said anacondas stopped feeding over the entire gestational period of about seven months.

"The reptile is ovoviviparous and retains its eggs until they hatch and give birth to live young," Wong said.

"In view of this, we will separate the male to allow Jasmine to recuperate." 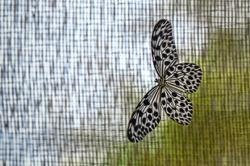 Eight Abu Sayyaf members and their families rounded up in raid on mangrove swamp in Sabah's Beaufort district
Only Miti approval letter and either employers' letter or workers' tag needed to travel for work, says Miti
Pakatan's Selangor lawmakers call out Education Ministry over lack of action on Ain Husniza's claims
MyKad applications for 12-year-olds can now be made online
Penang allows terawih, Aidilfitri prayers in MCO, CMCO areas
Vaccination 'walk-ins' actually to prevent wastage because of no-shows, says Sabah minister
A Bersatu leader was willing to 'roll over' to Pejuang for RM70,000 a month, claims Dr M
Kelantan Info Dept signs up 2,000 for vaccination
Ez ADU app provides platform for consumers to file complaints, says Rosol
Ain Husniza says girls should not be judged by appearance, clothes