SPEAKER Datuk Azhar Azizan Harun has rubbished claims that he had taken sides when chairing the Parliament proceedings.

“I do not want to polemicise the issue. I can’t do that and I am not going to do it, ” he told reporters during his visit to the media room.

Azhar was asked to comment on claims that he had taken the side of the government when he interjected during a debate by Finance Minister Tengku Datuk Seri Zafrul Tengku Abdul Aziz.

He also denied that he had spoken on behalf of the minister during the debates last week.

When Tengku Zafrul was explaining the Goldman Sachs issue in his winding up speech, Azhar interjected, pointing out that the settlement was a decision by the Finance Ministry and that it had definitely been brought up to the Cabinet.

Tengku Zafrul responded, saying that the Cabinet had given the mandate to the Attorney General and his team to negotiate a settlement.

“I was merely keeping time. That is all I can say.

“I will accept criticisms. It is part of my job, ” he said.

Earlier, Azhar distributed food to media personnel covering the proceedings and thanked them for their good work.

He said the media played an important role in providing in-depth coverage of the proceedings to the public.

On a separate issue, the Speaker said he hoped to see continuous maturity in the debates.

Azhar also expressed his gratitude to both his deputies – Datuk Rashid Hasnon and Datuk Seri Azalina Othman Said – for helping him to take charge of Parliament proceedings.

“I am currently reviewing Parliament’s institutional reforms and will proceed with the necessary measures towards better planning and other improvements, ” he said. 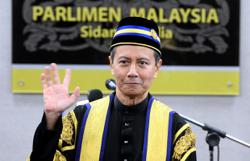 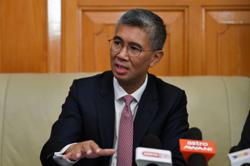 Don't depend on ringgit value to be competitive, Zafrul says