Inter-zone travel restrictions in Sarawak to be lifted on Aug 15, says DCM

KUCHING: Inter-zone travel restrictions in Sarawak will be lifted on Aug 15 in view of the current Covid-19 situation in the state, with no new cases reported on Monday (Aug 10).

Deputy Chief Minister Datuk Amar Douglas Uggah said individuals would be allowed to travel between Zones One and Two in the state without a police permit effective Aug 15.

"The state disaster management committee has discussed this at length and listened to views from the Health Department and tourism industry.

"We considered the current situation of positive cases and took into account the health and economic aspects before making this decision," he said at the committee's briefing here.

The travel restrictions, which required a police permit for travelling between Zones One and Two, came into effect from Aug 1 to 14 as part of the state's additional measures to contain a recent surge in Covid-19 cases.

Zone One covers Kuching, Samarahan and Serian divisions while the remaining divisions from Sri Aman to Limbang are grouped into Zone Two.

Uggah also reiterated that it was compulsory for all business premises to record the names and phone numbers of every visitor, whether in writing or by using the MySejahtera, Qmunity or CovidTrace app.

He said this was meant to facilitate effective contact tracing and enforcement of compliance with standard operating procedure (SOP).

"The premises have a choice to record the details in a book or use one of the apps," he said.

Sarawak's tally of confirmed cases remains at 681 with 19 fatalities.

Uggah said four people were discharged from the Sarawak General Hospital on Monday,

bringing the number of recoveries to 656 or 963% of the total cases to date.

He also said there were still 10 active clusters in the state involving a total of 70 cases. 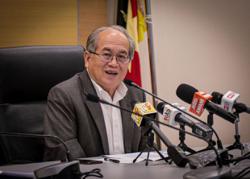 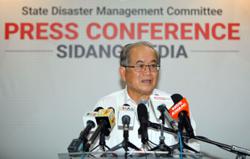